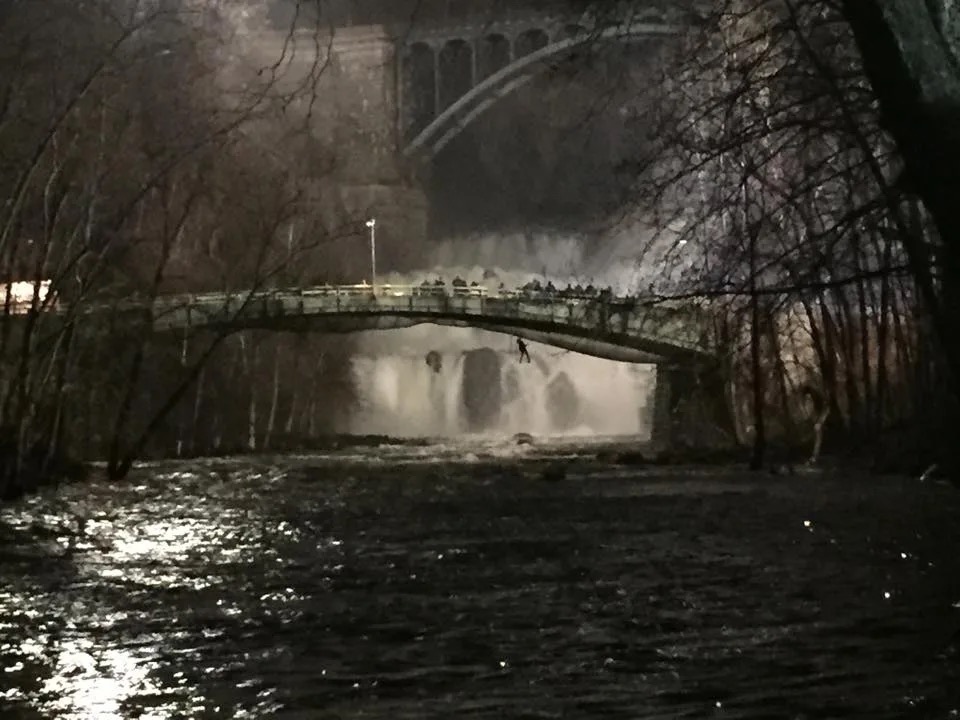 We never know what we are going to find ourselves doing here at CTR. We could be running boats in the Long Island sound, crawling through a deliberately collapsed house in Vermont or standing by to drag someone from a permit required confined space. Back in the spring however we got to take on a new job, one for which we had not been tasked with before, we stood by, ready to save Bacon!

Kevin Bacon and his friends (when I say friends, I mean the production company and staff) were filming a chase scene for the season finale of the TV show “The Following” in downstate New York. They had worked up an exciting stunt that involved a potential fall in the Croton River, and had nicely asked us if we could come play also. How could we say no to Kevin Bacon?

The Croton River actually became part of the New York City water supply when in 1911 engineers constructed the 300 feet high Croton Dam across the river creating, a 14 billion gallon reservoir. That reservoir and dam would provide the dramatic backdrop to filming the scene and would require us to set up on a fast moving shallow section of the river just below the dam.

CTR was charged with providing down stream safety to the stunt crew. They would be filming up on a small bridge that spans the river in the shadow of the dam. Having worked and trained on a variety of swift water venues including the Croton we elected to set up a Shower curtain down stream and place Rescue Swimmers along the shore line armed with throw bags.

After a briefing with the stunt crew we developed a pretty simple plan. If Kevin or any of the guys were to fall into the river, self-rescue was to be their first priority (much the same as for us working any body of fast water). We would be ready to assist with thrown bags from multiple choke points down stream. If unable to self-rescue we would be ready to make a go rescue and use the shower curtain as a final safety back up.

Setting up on day one we shot a pilot line across the 300 feet gap to establish the highline for the shower curtain. A pilot line is a light cord attached to a small weight that we fire with an industrial catapult to the far shore. We were then able to bring across our ½” static water rescue rope for the high line. The shower curtain is a pre tied webbing loop system (almost like a net) designed to span a section of the stream and provide an easy handle to grab on to from someone coming down the river. It hangs from the high line by a system of carabineers and has two control lines to assist with its placement and lateral movement. These control lines actually allow us to manipulate the curtain and potentially “catch” someone in the water. Ideally a shower curtain is set up diagonally across the water to allow the natural energy of the stream to bring the victims to shore after they grab on. All said, after set up, we had about a 260 feet span high line about 6 feet above the water and were ready for action!

Control lines hang from the high line by carabineers. The control lines can drag the curtain river left or right

All that was left to do was get dressed and wait, and wait, and wait. Two days later and we were packing up and driving home. All shooting went off without a hitch. Proper planning and preparation had prevailed. Two days and nights of filming would be transformed into seven and a half minutes of TV show time and a few members of CTR would become stars of the small screen. Of course we still have to keep our day jobs just yet, when I say stars I mean extras dressed as yes, you guessed it, rescue swimmers. That being said, every one of us there for those couple of long cold spring nights was ever ready to save a little bacon!

All of us here at CTR are always looking for the next adventure or challenge. If you are looking for some help, training, support, more blogs or just answers to questions feel free to contact us anytime.