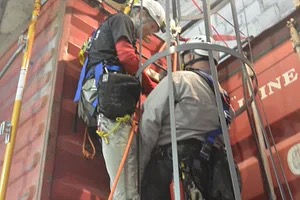 The fire service is an amazing and rewarding profession with limitless potential. Like many other professions we face challenges that go way beyond our responses. Unions fighting for salaries, manning, training and equipment. Insurance prices increase to the same proportion as our benefits decrease. We have an enormous amount of latitude while we are operating at the scene of an emergency to accomplish our goals and occasionally we get injured and sometimes it’s much worse. That will always be as noble as it is regrettable. First Responders work in hazardous environments. That requires us to simulate these environments as best we can to achieve realistic and effective training. When someone gets injured it always forces us to take that moment to pause, that gut check that we did right by the people we are responsible for. Risk can rarely be eliminated completely but with a good look how we manage and setup our training environments we can get close while still providing excellent training.

‍
With the exception of Y-Lanyards, Industrial Fall Protection has never been thought of as a viable option for use in the fire service. Though we may think of them as 2 separate disciplines, the manufacturers of equipment for Working at Height don’t see that the same way, gravity is gravity no matter what you’re doing. With the increased availability of CNC machining, the endless combinations of fibers and constructions for rope, the vertical world has seen some incredible developments in the past few years. I mean, a rope that welding slag just bounces off of without damaging it?!   It’s time we take a look at the other half of the Working at Height world and consider adopting some of their methods in the interest of safety and ease of use.

‍
For Get Out Alive, bailout and a lot of ladder training, Self Retracting Lanyards(SRL) can be installed and moved around as needed. I’m not suggesting that after the recruit throws a ladder for the first time that we stop and install an SRL so he can climb. I am suggesting that you should watch the recruit climb a ladder with an SRL attached before you teach him how to put the ladder up to ensure he has some aptitude for it. We don’t always know what kind of experiences our new people have had and asking them do something we find innocuous may bring out a fear of heights they didn’t even know existed. Happens in recruit classes all of the time and occasionally results in a fall.

‍
In 2012 the NFPA revised the definition of Light Use gear to Technical Use. This change by itself may or may not affect the way you operate. It has made it easier for those technicians who work in the discipline regularly and have been forced into using General Rated gear because that’s what they were told was required to use for a 2 person load. The “T” rating has given us a lot of versatility in which to operate but like everything else, it takes knowledge and practice to operate safely.
As a result of this revision self trailing backup devices like the Kong Backup, the ISC Red and the Petzl ASAP can be used by technicians for personal protection and in many cases placed into systems as a primary belay or even placed in key points of a system as untended belay to guard against a free fall. They are far more reliable than using prussiks in these same areas. They do not require any specialized tending and do not suffer from compatibility issues as some prussik cords and host ropes do. Unlike devices like the 540 Belay which work well, on the right rope, but has no versatility, many of these devices can serve multiple functions. The Petzl ASAP can be used as a personal device and a system device, just be certain you have the required 2 person shock absorber, the L57 Absorbica. The Kong Backup and ISC Red can be used as a personal device, a system device and also as a rope grab but only on ropes of up to 11mm. Most of the devices also serve very well as Travel Restraint for members operating near a fall hazard.

‍
Teams that have towers as part of their response areas can be served very well by having the first member climb using Y-Lanyards trailing a single rope and then the remainder of the team follow using that single rope with a self trailing device as fall protection to save precious time in clipping and re-clipping, each time with the chance of improperly clipping and increasing your chances for falling. We should look to OSHA 1926 and ANZI Z359 fall protection standards for guidance so we can protect our members more thoroughly during training. Consider this, until there is an actual emergency, it’s just another work site.